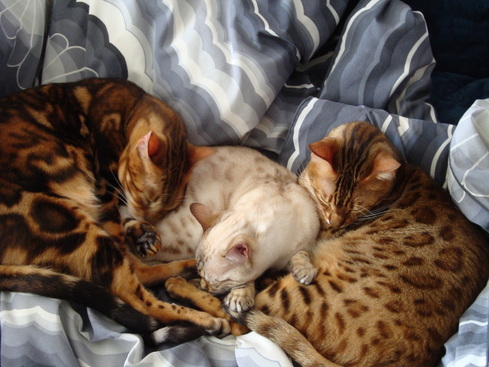 The Bengal is a relatively new breed of  cat which was first bred in the USA and was  originally created by crossing an  Asian Leopard Cat with a domestic cat. The  domestic Bengal derives its name from  the Latin name of its wild ancestor,  Felis Bengalensis (Asian Leopard Cat).  Whilst the domestic Bengal is similar in  appearance to the Asian Leopard cat and  its genetic makeup contains a  contribution from that wild cat species, its  temperament is however purely  domestic. The goal in developing the domestic  Bengal cat breed was to preserve  a strong physical resemblance to its beautiful  wild ancestor and, at the same  time, the new domestic breed was designed to be a  pleasant and trustworthy family companion. Therefore, the conformation of the  Bengal is definitely  reminiscent of its ancestors.

Bengals  are intelligent and athletic and  seem to look on everything around them as "can  this be played with?". Their  playful natures makes them ideal companions for  the younger members of the  family, who usually can do anything with them. The  young humans can act out  their fantasies and have the companion they want. So  many times we have seen a  young human walking around with an adoring Bengal  marching alongside sharing the  moment.

The Bengal is a large,  sleek and very muscular cat  with its hind-quarters slightly higher than its  shoulders with a thick tail  that is carried low. The Bengal should be alert and  affectionate and its wild  appearance is enhanced by its distinctive spotted or  marbled coat which should  be thick and luxurious. There can be both Black or  Brown Spotted and Black or  Brown Marbled Bengals, as well as Snow Spotted and  Snow Marbled Bengals.

Bengals have a unique pattern  which is  not found in other breeds of cat.. There is no other breed of cat which  displays the gold or pearl dusting  effect (glitter) of the Bengal. The texture  of the coat is unique. It has the  feel of satin or silk.   In recent years, as  the breed has moved further away from  its origins, breeders have been able to  develop more distinctive rosetted  patterns. This rosetting has enhanced the  uniqueness of the breed, as has also  the recent appearance of Bengals with  almost white undersides. Even the voice  of a Bengal is different from that of  other domestic cats. It has been  described as a cooing or chirping or as a  strange gravelly sound. They are a  very vocal breed and have a wide vocabulary  that may on occasion be quite  strident especially in unfamiliar situations. This  should not be confused with  aggression; it is an individual means of expression.  They also love to play  with water! Bengals seem to have preserved the  self-assurance and confidence essential to their wild ancestors whilst acquiring  an affectionate disposition  and an extremely energetic, playful nature. The  overall impression is of a  miniature leopard with a loving dependable  temperament. They are extremely  sociable and interact well with other household  pets.