Herts & Middlesex Cat Show / Wessex Cat Show
1st March 2014
Thuja Amber had a red card day. She awarded first her open class in both shows, one Best of Breed and first in all her side classes. Next time she will be competing as an the adult.

Thuja Amber attended the Croydon Cat Show on 8th February 2014. This was her first show and she came first in her open class and she was awarded Best of Breed. I am so very proud of her!
(Amber is from the same litter as Flora below.) 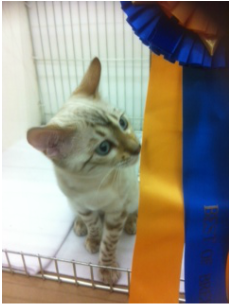 Wiltshire and District CC  6th July 2013
Again another successful day for Hornbeam, he was awarded his third and qualifying Grand Premier certificate. On his next outing he will be competing in the Imperial class not bad for such a young boy. (DoB 14/05/12)
I am so proud of his achievements.

Hornbeam had a very successful day at the
Cambria Cat Club /Somerset Cat Club 1st June 2013
He was awarded two Grand Premier certificates - just one more for that Grand title!
But I must apologies to anyone who had to judge him today, he was so grumpy I assume it was the temperature in the hall. I have spoken to him firmly and told him if he doesn't behave at the next show it will be his last outing!

Today Hornbeam was awarded his third and final Premier certificate.
He has achieved the title of Premier before his first birthday! 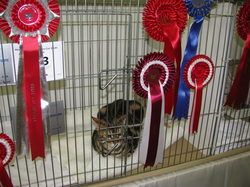 Herts & Middlesex Cat Show / Wessex Cat Show
2nd March 2013
This was Hornbeam's first outing as an adult, at just 9 months he was awarded his first two Premier Certificates.
He had a red card day taking first in his Open class and Best of Breed in both shows and first place in his other classes. 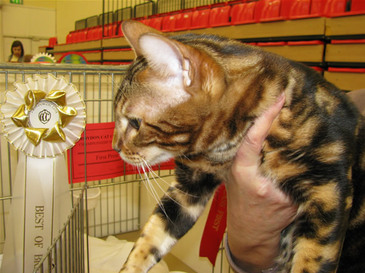